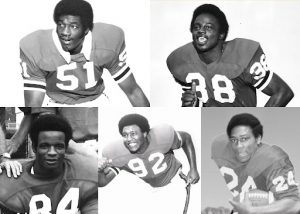 Five young men brave enough to sign on with the University of Georgia when it was one of the last three SEC teams to integrate have finally received permanent on-campus remembrance for changing the course of UGA football. A monument to them was unveiled Friday at Reed Plaza, a primary entranceway into Sanford Stadium, where the Bulldogs play South Carolina Saturday at 7 p.m. and “The Five” will receive 50th anniversary pregame recognition.

In December 1970, Coach Vince Dooley signed cornerback Larry West of Albany High School, defensive guard Chuck Kinnebrew of West Rome, and tailback Horace King, linebacker Clarence Pope, and receiver Richard Appleby, all from Clarke Central in Athens. They would start classes in September 1971, but the only way to understand what they did for their university is to understand UGA and Athens racially in the 1960s. 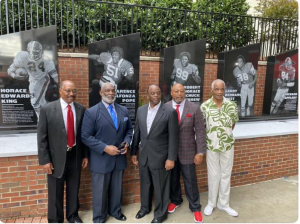 Georgia was integrated a decade earlier, in 1961, amidst a federal court order, a student riot, and national news coverage. When Hamilton Holmes – who integrated the university with Charlayne Hunter – expressed interest in playing football, administrators quickly discouraged him for fear opponents, or his own teammates, would try to harm him.

In 1964, the local Ku Klux Klan murdered Lt. Col. Lemuel Penn with a shotgun as he and two other Black U.S. Army Reserve officers drove through Athens after two weeks of summer training at Ft. Benning, headed for home and family in Washington, D.C. The Klan believed they were “outside agitators.”

On campus, racism flourished. Harold Black had his dorm room set afire twice, the university bookstore refused to sell him textbooks, and the staff at the university pool drained it after he took a swim.

In 1966, transfer student Ken Dious went out for the football team as a walk-on after playing the previous season at Savannah State — the story made national news. It also brought him death threats from the Klan, but he went through spring practice anyway. Dious did not return in the fall after Dooley made it clear he would not play in games.

Even after the Braves and Falcons came to Atlanta in 1966, drawing huge crowds to integrated competition, nothing changed in Athens. In 1967, UGA President O.C. Aderhold publicly blamed major athletic boosters for blocking integration. That year, Black walk-on Jim Hurley of Atlanta was a starting defensive end for the freshman team and received the Bill Mundy Award for having the highest academic average of any freshman athlete. But the next fall, as he saw non-scholarship white players moving ahead of him, he left the team early in the season. He later received an academic scholarship to Vanderbilt where he was a backup end.

In 1968, Georgia did give a partial, live-at-home track scholarship to Maxie Foster of Athens. But he was often late to practice because football players would not allow him to enter the locker room. Georgia track coach Spec Towns, a gold medalist in the 1936 Olympics, once had to rescue Foster from several players harassing him.

Foster attempted to try out for Georgia’s freshman basketball team but freshman coach Major Joe Bradley told him “an alumni discussion had decided it was not the time to integrate the major sports.” Athletic director Joel Eaves would say years later, “We were just cautious. We were just not sure how it would work out. We were in a section that was slow in integrating.”

John King was Georgia’s first Black signee but decided instead to go to Minnesota, where he was All-Big Ten.

But many Deep South colleges had already integrated their football programs. By the fall of 1969, Auburn, Mississippi State, South Carolina, Georgia Tech, Florida, and FSU all had Black scholarship players on campus, as did SEC foes Tennessee and Kentucky. When Kentucky fullback Houston Hogg came on the field in Sanford Stadium that season, he was greeted with rounds of the n-word from the Georgia defense.

The late Ronnie Hogue entered UGA in 1969 as the first Black athlete on full scholarship and was well-received by Bulldog basketball fans. Before Hogue’s 1969-70 freshman season was over, Dooley signed 6-1, 225-pound running back John King of Huntsville, Alabama, to an SEC letter-of-intent in late February. But King hadn’t even visited Athens and the SEC letter only prevented him from signing with other southern schools. He eventually signed a national letter with Minnesota, where he was All-Big Ten and a 1,000-yard rusher. (FSU signed Ernest Cook to integrate its football program in 1968, but after receiving numerous threatening letters from FSU fans, his parents suggested he go somewhere else. He chose Minnesota.)

After losing King, Dooley was ready to look for more than one or two Black players for his 1971 class. He found five. Weeks after they signed in December 1970, three Bulldog players attacked two Black UGA students one night after following them into a university parking lot. Although the students testified in magistrate court, when the case was called six months later, the Black students reportedly “couldn’t be found.” The case was dismissed, and one of the three players would become  team captain in 1972.

Then, when “The Five” showed up for their initial preseason football camp in 1971, they found a mock KKK meeting set up on the front steps of McWhorter Hall, the athletic dormitory where they were to live. One Bulldog player had a white sheet over his head and was flanked by two teammates holding shotguns and wearing bandoliers of bullets. The Black freshmen were told to bow but none of them did.

The five were not easily intimidated. They all had helped integrate their high schools’ teams, and they also had each other, as they had quickly bonded. That was Dooley’s hope when he assigned them to the same suite. They would hold a “rat court” in their dorm rooms if they felt one of them had not lived up to the standard they set for themselves. “Our view was we all needed to be role models because we were under the microscope,” Kinnebrew said in 2017.

Their first season was spent on the 1971 freshman team – freshmen were not allowed to play varsity football or basketball at that time by the NCAA. Then, in 1972, Georgia joined LSU and Ole Miss as the final SEC teams to field integrated varsity teams.

In 1972 against Georgia Tech, King scored the first Bulldog touchdown by an African American. He had gained 299 yards against Florida’s freshmen and would be an NF running back for nine seasons, but he was mostly a wingback and parttime tailback as a sophomore and junior. He became the starting tailback in 1974 and set a school record with four TDs in one game. West, Kinnebrew, and Appleby were also starters.

Mostly, though, the five courageous and conscientious young Black men set a foundation. In 1975, Georgia signed 30 players and 13 were Black. In 1980, 20 of Georgia’s 30 signees were Black – the most African Americans previously signed by an SEC team was 15. Georgia won the national championship that season, and for the four years from 1980-1983 UGA had the best major-college record in America, winning 44 games and losing only two regular-season games and two bowls. How firm a foundation.

For an excellent account of the experiences of “The Five,” read Emily Giambalvo’s article, “How One Year and Five Men Changed the Course of Georgia Football.” https://www.redandblack.com/sports/1971-how-one-year-and-five-men-changed-the-course-of-georgia-football/article_1a3e6866-f947-11e6-bc58-fbbd946f085a.html