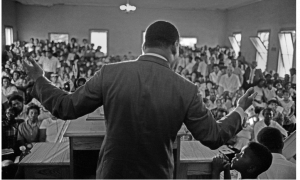 On King Day 2022, it’s good to recall Martin Luther King Jr.’s impact on the small-town, rural South and particularly on Greene County, Alabama blackest county and sixth poorest in America. For young Blacks growing up there in the 1960s, Dr. King was not someone you learned about in textbooks or classroom videos. He walked among you. He was there. He was real.

In this photo by Bob Fitch, Dr. King speaks at a packed Greene County church four days before the 1966 Democratic primary, encouraging Blacks to overcome their fear of challenging the white power structure by voting in the first election following the 1965 Voting Rights Act.

In 1968, just two weeks before his murder, Dr. King returned to Greene County to drum for support of the Poor People’s Campaign that summer in Washington, saying, “All ye who are tired of segregation and discrimination, come unto us.”

Five months after Dr. King’s assassination, 18-year-old Henry Harris, valedictorian of Greene County Training School, left on his own civil rights mission, becoming the first Black student to enroll at Auburn or the University of Alabama on an athletic scholarship. He would captain Auburn’s basketball team just three years later while flattening segregation’s door for the thousands of Black athletes who have followed him. But the weight was heavy and he would bear it until his death at 24.

In a 1967 sermon at a Chicago church, Dr. King had said, “A man has not begun to live until he can rise above the narrow confines of his own individual concerns to the broader concerns of all humanity.” Henry Harris set aside individual concerns the day he left Greene County for Auburn.

For more on Dr. King’s impact on Harris, check out this video with Remember Henry Harris author Sam Heys. https://www.youtube.com/watch?v=S8DkADP5ALI