A lonely walk: Franklin on his way to register for classes.

When Harold Franklin was growing up in Talladega, Alabama, during the Depression and WWII, his parents always told him and his nine siblings, “When you do something in life, try to do something that will help others as well.” Saturday, Franklin will be returned to the good earth of Talladega, having exceeded all parental expectations in a history-changing life that lifted up thousands and made Alabama and America a more just place to live.

Franklin died a week ago at his home in Sylacauga, Alabama, at age 88 – 57 years after integrating Auburn University during the tough times of the civil rights movement, taking a lonely walk on January 4, 1964 to bust open a door for multitudes to follow through. A journalist this week called him one of the most important Alabamians unknown to people in and out of the state. Franklin was more than that. He crafted a prototype for the impact a life can have when donated to society’s greater good.

Whether to protect Franklin or other students, Auburn isolated him in a small three-floor wing of Magnolia Hall. “I had a whole wing of a dormitory to myself,” he said, along with a key to the front door.

Franklin, a 31-year-old graduate student, left Auburn a year later after completing his master’s coursework in history. Faculty members rejected his thesis topic of civil disobedience, suggesting he instead write on the history of all-black Alabama State College, his alma mater. He followed their direction, but something was wrong with every draft he turned in. One professor said his work had to be perfect because he was Black and many people would read it. He eventually told his thesis committee, “Hell, what you’re telling me is I won’t get a degree from Auburn?”

Franklin received his master’s instead from the University of Denver and then taught history for 27 years at Alabama State, North Carolina A&T, Tuskegee, and Talladega College, retiring in 1992. 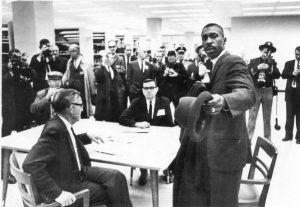 Franklin in the library as registration begins January 4, 1964.

In 2001, Auburn awarded Franklin an honorary doctorate and finally put up a historic marker in Franklin’s honor in 2015. But Auburn never addressed the racism that prevented him from earning a degree, preferring to believe he had simply left the university, although Franklin told his story to any reporter or audience who wanted to listen.

“During all those commemorations and discussions about integration at Auburn, they overlooked the story about a man who was cheated out of the degree he rightfully earned,” said Keith S. Hébert, an associate professor of history at Auburn and director of its public history program. So, in February 2020, at Hebert’s hastening, Auburn allowed Franklin to defend the thesis he wrote a half-century earlier. The room was full of graduate school faculty.

Hébert read a statement of apology. “It was an acknowledgment of past wrongs,” he told the Washington Post last year. “I’m part of a society that committed those wrongs. A lot of White people, even my students, say, ‘I didn’t do anything.’ But they fail to understand the privilege White people benefit from and the negative impact on others.” 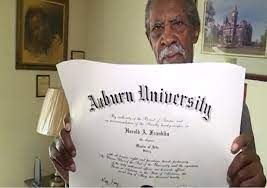 Franklin with the Auburn degree he finally received in 2020.

Franklin received a master’s degree from Auburn in the mail four months later and participated in commencement in December, nine months before his death. “I realized it wasn’t going to be easy when I came here,” he said then, “ . . . but I didn’t think it would take this long.” When asked what advice he would give students, he said, “Do your best and be honest. Treat everybody with respect, and if they don’t treat you with respect, don’t associate with them. That’s what I’ve tried to do all my life.”

When Franklin had applied to Auburn, he was a veteran with seven years of service in the U.S. Air Force, having left school to enlist during the Korean War, as well as a 1962 honors graduate of Alabama State. He wanted to go to law school next, but Alabama civil rights attorney Fred Gray needed a good student to apply to Auburn and asked him to get a master’s in history from Auburn first. Franklin said okay. Auburn rejected his application, and Gray filed suit.

When U.S. District Judge Frank M. Johnson Jr. ruled in November 1963 that Franklin must be admitted, Auburn appealed, lost again, and decided fighting further would only damage the university. When it then refused Franklin a dorm room, Judge Johnson ordered Auburn to house him like any other student.

A month before Franklin enrolled, President Ralph Draughon, who had fought integration since 1948, called a meeting of all students, faculty, and staff in Cliff Hare Stadium and outlined rules students had to follow or face expulsion, including turning in all guns. 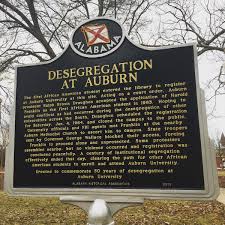 Marker put in place near Auburn library in 2015.

As Franklin arrived on campus to register for winter quarter on Saturday, January 4, 1964, more than one hundred state troopers were in place, and the campus was mostly quiet, with about 150 onlookers herded across the street from campus. Having already saved face with his populace at Tuscaloosa, Governor George Wallace stood down on Auburn, at Draughon’s request, to prevent federal troops from coming on campus. Order was maintained, and Auburn integrated without the student riot that occurred at Georgia, the fatal gun battle at Ole Miss, or the governmental revolt at Alabama.

Franklin was escorted onto campus by armed guards. Then it was determined by administrators that – because the courts said all students should be “treated equally” – they would follow the law. They decided Franklin should walk from his dormitory to the library to register for classes without a safety escort – a white student would not need an escort. “Harold had to walk 200 yards without police protection to register,” Hébert said. “Auburn fought integration right down to the last minute.”

Earlier this year, a plaza area was created adjacent to the library to accompany the historic marker placed there in 2015 to recognize Franklin’s courageous sacrifice. The plaza will be unveiled at a special ceremony in November, two months after Franklin’s death.