Pages 197-200
With 1:18 left to play, Harris fouled out with ten points, three rebounds, and four assists. Unselfish to the end, he had taken only seven of Auburn’s seventy shots. When he walked to the bench with his fifth foul, the crowd rose and began to clap. The ovation did not stop when Harris sat down. It continued. On and on. For a minute and a half. The Opelika-Auburn Daily News described the scene in an unsigned column:

When the proud and tall black man from Boligee, Alabama, left the floor, it took 90 seconds – because that was how long the crowd cheered him. They cheered and clapped and whistled not because it was Henry’s last game at home, but because he was simply, Henry Harris. Sure, he was the team captain, a senior and the first black to be signed to a basketball scholarship at Auburn. But more so, he was, as one fan put it: “Gee, that’s Henry Harris.” Five words can’t say it all but somehow they fit.

Harris had given Auburn fans the opportunity to cheer a black man, and he had changed them in the process. Ironically, he had been an Auburn guy all along—he did all the dirty work, the hard stuff, he played tough. He was the ultimate underdog. The ovation proved sport’s ability to unify shards of society—perhaps that’s why integration was resisted so long. He was the long-feared “other,” yet he had buried the myth and forced players and fans to respect him for the size of his heart, demonstrating a resilience and courage that underline the universality of all. 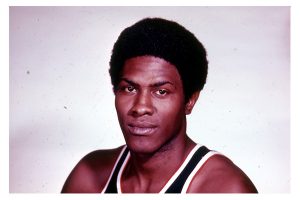 A week after the home finale, Auburn played at Tennessee, which finally had an integrated team five years after signing and then losing future Olympic star Spencer Haywood in 1967. Harris gave a regional TV audience an impressive farewell, with sixteen points and fifteen rebounds. “When inspirational leader Henry Harris fouled out with just over four minutes to go, the Vols pulled resolutely away,” wrote John Pruett of the Huntsville Times.

The Tigers then traveled to Lexington for Adolph Rupp’s final home game; the seventy-year-old Kentucky coach would be forced to retire at the end of the season by the university. With black pioneer Tom Payne having left school early to turn pro, Rupp’s final team was as white as the one that lost to Texas Western six years earlier. Kentucky beat Auburn, 102-67, and for the first time in his career, Harris failed to score—on the same court where he’d scored forty-three points as a freshman. When he fouled out, he was applauded by Kentucky’s fans. He had made a positive impression. “I remember Henry,” said Kentucky co-captain Stan Key, a guard who faced Harris eight times over four years. “He was a little ahead of his day, very confident. We did talk a little during games, and he was a true gentleman. Really a nice guy. You can’t say that about everybody.”

Three nights later, Harris’s career ended in Oxford, Mississippi, where he had played his first SEC opponent as a scared-to-death freshman. But this time, his opponent would also have a black player, 6-foot-5 Coolidge Ball, a quiet young man as country as Harris. He would score twenty-three points and lead the Rebels to victory. “Harris, who has played on gimpy knees for the past two years, finished a courageous career with nine [points],” wrote Pruett. Harris, who fouled out of his fourth straight game, told reporters afterward, “Four years . . . it’s hard to believe they’re over. I only wish we could have won more.” In losing its sixth straight game, Auburn finished with a 10-16 record—its worst in twenty-two years but only one loss worse than the previous year’s team, which included Mengelt, a second-round NBA draft choice.

When finally given a chance as a black American, Harris had hugged his opportunity. He never missed a start. Not at Auburn or any of the dark Dixie highways he traveled. He was always there, confronting the past and foreshadowing the future, his simple presence an act of defiance—“Here I am.”

On one good leg, he averaged 11.3 points per game, led the team in assists, and was second in rebounds with 6.2 per game. Although his scoring average dropped each season, his 924 career points placed him eighth on Auburn’s all-time scoring list. The media named him third team All-SEC. Three black Americans who had followed Harris to Deep South schools—Wendell Hudson and Raymond Odums of Alabama and Georgia’s Ronnie Hogue—were among the fifteen All-SEC selections.

A hero supposedly suffers for those who follow him, according to Joseph Campbell, the great American chronicler of myth. Henry Harris was a hero. He gave himself to a cause bigger than himself. He played hard, he played hurt, and he kept his mouth shut. He knew what he had to do and he did it. He stayed—when all the stereotypes said he wouldn’t and common sense said he shouldn’t.

Twenty-four-year-old David Housel was one person in Auburn’s athletic department who seemed to understand all that. In an article for the Auburn-Vanderbilt game program—Harris’s final home game—Housel, who would become Auburn’s athletic director emeritus in 2006, called Harris one of Auburn’s greatest competitors ever, in any sport:

This is a personal opinion. Though personal, it is an opinion shared by many both in Auburn and across the Southeast. It concerns an Auburn basketball player. That player is Henry Harris.

Henry Harris – that is a common name, nothing in that name to excite crowds and stimulate headline writers. It’s just a name, a common, everyday name, Henry Harris. But that’s all right. Henry Harris never had to rely on his name – or the color of his skin – to get things done.

He does them himself, on the basketball court, and herein lies part of the story of the greatness of Henry Harris, but only part. . . .

To remember Harris as the first man of his race to receive an athletic scholarship to Auburn would be an injustice, especially to Harris. His desire is – always has been – to be “just another basketball player.” But to remember Henry Harris as a competitor would not be an injustice. That’s what he is, one of the best competitors to ever suit up in an Auburn uniform in any sport.

This has been a painful year for Henry Harris. Painful in that the team won-loss ratio is no better than it is, and painful in a physical sense because of an aggravated knee ailment.

A lesser man would have given up the year, possibly the career. But Henry Harris is not an ordinary man, and to consider him a lesser man would be false to all that athletics import. Despite pain bordering on anguish, pain that has robbed Harris’ fine black legs of their speed, quickness and maneuverability that once marked him for stardom, he kept on playing, never resting on the court, playing and striving toward the ultimate goal – victory.

Henry Harris is an athlete’s athlete. He is not perfect. He’s made mistakes and he’s had bad games, but he’s always been a competitor. Make no mistake about that. Long after lesser men have acquiesced, Henry Harris is still competing and herein lies Henry Harris’ true greatness.