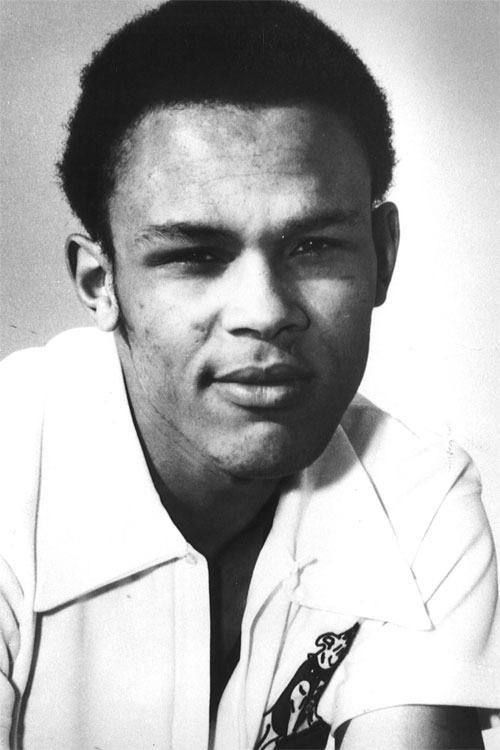 Ronnie Hogue’s death this month reminds us of both how far we have come and how much we’d rather not look back on where we’ve been.

A half-century ago, Hogue was playing basketball as the first African American on a full athletic scholarship at the University of Georgia. Last Friday, Sept. 18, during the fiftieth anniversary of his bold, watershed freshman season, Hogue died in Maryland at 69 – another black American killed by covid-19.

When I heard the news, I thought back to interviewing Hogue during his 1969-70 freshman season, when he was gliding through opposing defenses with ease. To me, Hogue was the hope of a new day, of change, finally. He was only 19 but savvy enough to say integration was not his primary motivation for coming to Georgia, although he was sure he’d look back on it with great pride as an adult.

It would be nice if his alma mater could show such pride in Hogue in perpetuity. Nowhere on the campus that he helped open to all Georgians is there any permanent reminder that Hogue ever passed through, that he was any different than the thousands of students before or after him.

Georgia is like most major southern state universities – rarely looking back on the era when college athletics was part of the resistance to integration. Restaurants, motels, movie theaters, even swimming pools integrated before Deep South college sports, which evolved into the last line of defense of segregation.

Hogue died within a week of the fiftieth anniversary of the 1970 Alabama-Southern Cal game, which received its usual feel-good media moments. The game seems to be the racial history some prefer – an older white man sees the error of his thinking, repents, and the SEC lives happily ever after. It’s less complex and helps some folks feel better, although Bear Bryant had already signed his first black football player nine months before USC game – following a class-action discrimination lawsuit filed in 1969 by black Alabama students and funded by the NAACP. Then, a month before the 1970 USC game, Bryant agreed to sign at least five more black players in the next year in order to get the lawsuit postponed, and eventually dismissed. 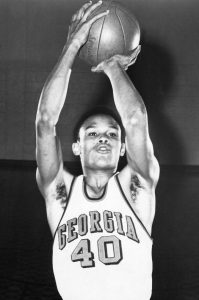 It’s a nice integration sidebar, but it robs Hogue and others their justice in memory and all of us a chance to understand our past. The heroes were neither Bryant nor the Southern Cal’s black players, who blew into Birmingham for a couple of days and left.

The real heroes were the courageous young black Americans who stayed and stayed and stayed, until they wore down their doubters with their talent decorum, hustle, team play, and what Dr. Martin Luther King Jr. called “our capacity to suffer.” (Auburn pioneer Henry Harris played the final five games of his 1970-71 junior basketball season with two torn knee ligaments, proving blacks were “tough enough.”)

When Hogue was coming out of high school in Washington, D.C., he had a choice of 75 to 100 colleges, including Harvard. When Georgia recruiter John Guthrie mentioned Athens, Hogue thought “no way.” One of 14 children of a Georgetown Hospital nurse and a glass-cutter at the Washington Navy Yard, Hogue had heard of Athens. And he had heard of Lemuel Penn.

Penn was a lieutenant colonel in the U.S. Army Reserve, driving home to D.C. in the summer of 1964 from two-week summer training when he was killed just before dawn by a shotgun fired into his car by the Athens-area Ku Klux Klan. Penn’s day job had been supervising five D.C. vocational high schools, and Hogue would go to McKinley Tech, so he knew Penn’s story.

But Hogue’s former Boys Club coach, Bill Butler, talked to him about the importance of breaking down racial barriers, according to Across the Line author Barry Jacobs, and Hogue eventually changed his mind on Athens, even returning to earn his business degree in 1977.

Georgia, Alabama, Auburn, LSU, Ole Miss, and Vanderbilt all integrated basketball before football, enabling their fans to grow accustomed to the idea. If Hogue or any of the other “firsts” had failed – as athletes, students, teammates, or good citizens – integration would have slowed. That was the pressure they all lived under.

Hogue and the rest were essentially revolutionaries, assigned to live behind enemy lines until reinforcements could arrive. As forerunners of change, they were greeted by fans in all SEC arenas with threats, racial slurs, and unvarnished hatred. The late Perry Wallace of Vanderbilt, the SEC’s first black basketball player, said his body could go “icy cold with fear” thinking about an upcoming road trip.

“Ronnie was certainly booed and picked on, but he wore it as a badge of honor,” said David Muia, the Georgia team manager then. “He was going to go out and show those fans that he could play and was better than their players.”

After hitting a 30-foot, game-winning shot as a sophomore at Tuscaloosa – while wearing an eyepatch because of a scratched eye – Hogue ran off the court pumping his fist at the Alabama student section. “Ronnie was a tough kid. He heard it all and used that to fuel his drive,” Muia said.

Even on their own campus, most “firsts” faced a hostile environment with no social life, and the emotional toll could be deadly. Two killed themselves within a couple of years of their playing careers – Auburn’s Harris and running back Calvin Patterson, the first black football player at Florida State.

When Hogue signed in 1969, Georgia coach Ken Rosemond told his team, “He’s coming and he’s one of us,” recalled former teammate Tom Brennan, a retired college coach and radio/TV analyst. “And then it was all on him (Hogue) – we’ve done our job. I can’t believe how oblivious I was to the whole thing. We should have helped him out.”

Hogue lived in McWhorter Hall, the athletic dorm, for two years before the football team integrated with five freshmen in 1971.

Georgia had given Maxie Foster a partial athletic scholarship in 1968, but that was in track, where hardly anyone noticed, except the football players who wouldn’t let him enter the hallway to the locker room. When Foster had sought to “walk on” the freshman basketball team, coach Joe Bradley told him “an alumni discussion had decided it was not the time to integrate the major sports.” A year earlier, outgoing university president O.C. Aderhold had blamed influential alumni donors for blocking athletic integration.

But “something happened in Washington, D.C., the following year, and they made the statement that if you didn’t have minorities in your athletic program, you wouldn’t receive federal money,” recalled Foster. “A very vigorous effort was made to get Hogue.”

U.S. Department of Health, Education and Welfare employees had begun visiting southern schools to ascertain if they were recruiting black athletes. Florida quickly signed track athlete Ron Coleman in 1968 when it was reported the school was not in compliance with the Civil Rights Act of 1964. Federal oversight also drove South Carolina’s athletic integration and possibly Auburn’s.

Hogue, always smiling and extremely likable off the court, had a steely competitiveness on it. As a junior against LSU, he scored 46 points with 20-of-23 shooting – and without the three-point shot. A half-century later, he still holds the Georgia scoring record on its home court. He was co-captain as a senior but told me in 1980, “Off campus, I was just another nigger. A couple of times I got stopped and harassed by the police.”

“That guy had a great strength of character,” said Muia, a lifelong friend. “I don’t know what drove him every day to get out of that dorm and go to class – it was a foreign place to him. He could have gone anywhere. I know he was very proud of it (integrating Georgia).”

Georgia has been proud enough of Hogue to celebrate him in 2011 as part of the fiftieth anniversary of the university’s 1961 integration and to honor him during a game two seasons ago. And the Bulldogs named him their “SEC Basketball Legend” in 2005, an annual recognition of former player from each school.

But there is no marker or plaque or “40” jersey hanging from the rafters to prompt a student or fan to ask, “What did he do?” and then learn of a time long since gone because of the bravery of black college students like Ronnie Hogue. (Georgia has retired the number of only one men’s basketball player, the great Dominique Wilkins, who would’ve never gotten in the door if Hogue had not gone through it first.)

Major league baseball took 50 years to finally recognize Jackie Robinson appropriately, retiring his number “42” in all its stadiums in 1997. How can the SEC’s racial pioneers not deserve the same in their school’s arena or stadium?

Vanderbilt retired Perry Wallace’s number in 2004 because its students demanded it. Then early this year Alabama retired the number of its first black scholarship athlete, Wendell Hudson, a basketball player who entered in 1969, like Hogue. The two would check in with each other every time Georgia and Alabama played. Years later, Hudson would say he had a reason to leave Alabama every day he went on campus as a freshman.

In 2016, Kentucky permanently preserved the memory of its first two black athletes, Greg Page and Nate Northington. (Page died after being paralyzed with a broken neck during a half-speed 1967 preseason practice in shorts, shoulder pads, and helmets.) The statue project was driven by former teammate Paul Karem.

Otherwise, that’s the racial highlights around the SEC. The league and its members have historically “socially distanced” themselves from a painful, regrettable time. Maybe 2020 is the year the evasive action should end.

You cannot overcome what you do not face, and Ronnie Hogue and other black teenagers are the ones who confronted racism in the SEC and overcame it, making the league, their universities, and all of us better in the process. Hogue should be remembered so we do not forget him, or from where we have come. He changed Georgia athletics forever and made his life matter for generations. Few Georgia students have ever done more.

Sam Heys is author of Remember Henry Harris, a book that tells the story of the integration of the SEC. Its second edition was released this month.