On Saturday, February 15—fifty years after his freshman season—his jersey will become the first retired in school history in any sport. And it will become only the second retired jersey belonging to an SEC racial pioneer in basketball or football, joining that of Vanderbilt basketball player Perry Wallace. Hudson’s jersey retirement is powerful testimony to how athletics have helped change the South.

Page 125-127
Parker High School, Birmingham’s huge downtown black high school, won Alabama’s first integrated state basketball tournament in 1969, and one of its stars was 6-foot-6 Wendell Hudson. Yet the only colleges interested in him were junior colleges and historically black colleges—and Alabama, whose coach, C. M. Newton, was still looking hard for his first black player. After a month of hesitation, he offered Hudson a scholarship. “Wendell was the most unsung player on the team, but he was in the top ten percent of his class,” said Newton, who knew a more publicized recruit might make integration easier. “But after a while, our staff felt like, ‘Let’s go with our instincts.’” 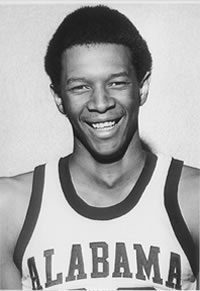 When Lester McClain signed a football scholarship with Tennessee in 1967, his mother cried because it was the greatest thing ever to happen to the family, but when Hudson decided to go to Alabama, his mom cried because of fear, convinced her son would be killed. At the signing, she anxiously asked Newton how he would be treated. He replied: “I don’t know. I’m a middle-class white guy who works there. All I can promise you is how he will be treated by our staff.”

Like Harris, Hudson was friendly and easygoing, and his urban family was similar to Harris’s rural one—a teenage mom, no father figure. He lived near Dynamite Hill and so close to the Sixteenth Avenue Baptist Church that he felt the bomb blast that murdered four black girls in 1963. One of his teachers at Parker was the mother of one of the girls. Founded in 1899, Parker was the primary source of the participants in Birmingham’s 1963 Children’s March.

Newton and Hudson both got plenty of hate mail, although Hudson’s was from blacks—“I can’t believe you’re going to Alabama. You sold out.” However, Hudson knew he was getting an opportunity people had died for and refused to forsake it. “If you want to play basketball, you have to take some chances somewhere down the line,” he said. He did not turn anxious until he started packing to leave home. “All of a sudden, I went from being in my neighborhood, which was all black, to the only black player in a dorm with 160 to 170 other people. . . . It was scary.”

When Hudson moved into Bryant Hall, all was quiet, but by the time he went to dinner in the athletes’ cafeteria, the football players were back from practice. “I walked through the door and it’s all noise, everyone’s talking, plates clanging. By the time I got to the front of the line, it was quiet . . . ,” Hudson remembered. “There was a little wall where you got your food. I turned the corner and the people serving behind the counter were black, and they were smiling. I had more food on that plate than I could eat.” 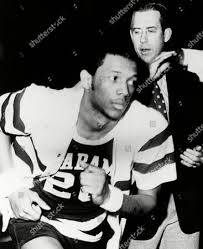 Eventually, Hudson began to tell himself, “I don’t care if you want me here or not. I’m here. I didn’t do anything wrong. The system was wrong. I have a right to be here.” He would walk out of a freshman history class and take an “F” rather than listen to the professor talk about the joys of the Old South life for both races. Coach Newton, meanwhile, kept his promise to Hudson’s mom and treated her son like everyone else. He assigned him a white roommate.

Page 135
On Valentine’s Day, Alabama came to Auburn, and C. M. Newton was angry before the game even tipped off. During the freshman game, Auburn football players sitting behind the Alabama bench harassed Wendell Hudson, the Tide’s first black athlete, saying, “some stuff that was just unbelievable,” according to Newton, who went to athletic director Jeff Beard to clear out the players. “It was the most racial slurs I had ever heard,” Hudson said. “‘Nigger, go home. Nigger this, nigger that.’”

Page 136
Harris still had one more trip to make, to Ole Miss. Six days earlier, Alabama pioneer Wendell Hudson had played there in a freshman game and gotten in immediate foul trouble. “I may have played eight minutes,” he said. “It was a joke. We knew what was going on.” Ole Miss students were right behind Alabama’s players. “I’m sitting on the bench, the rebel flags are waving, and they’re calling me every name in the book.” Again, football players were the ringleaders. And again, Newton complained to the athletic director, Tad Smith, about “a hell of a lot of abuse.” As soon as the Alabama team bus crossed the state line headed home, Hudson asked to stop; Coach Newton thought he was sick. But when Hudson got out, he fell to his knees and kissed the ground, saying, “I’ve never been so happy to be back in Alabama.”

Page 221
But when the season was over, Alabama pioneer Wendell Hudson had led the SEC in both scoring and rebounding and was voted SEC Player of the Year.

Page 311
Wendell Hudson became an assistant coach at Ole Miss a decade after the vicious verbal attacks he received as a freshman there. Perhaps because he had grown up on Birmingham’s Dynamite Hill, Hudson came to Alabama expecting the worst. “It was a difficult experience at times, but a positive one. I’m a better person for having done it,” he said. “If I had to do it over again, I would without a doubt.” In Tuscaloosa, Hudson found a lifelong mentor in C. M. Newton, who brought him back as a student assistant coach when a knee injury abruptly ended his pro career. “I gave Wendell a job because I wanted him around. He was a good person,” said Newton, who launched Hudson on a thirty-four-year college coaching career. Hudson returned to Alabama in 2003 as associate athletic director.

Page 316
Newton and Raveling, as well as Joby Wright, were assistants to Bobby Knight in the 1984 Olympics. Newton would take a major role in USA Basketball, putting together America’s first Olympic Dream Team and, as a member of the NCAA rules committee, bringing the three-point shot to college basketball, having watched its effect internationally. Newton went into the Hall of Fame as a “contributor.” He invited Hudson to his induction, listing him on the guest list as “family.” “Had he [Hudson] failed, I don’t think there would have been a Wilbur Jackson or a John Mitchell,” Newton said. “. . . It was not a courageous effort for us to offer Wendell Hudson a scholarship. It was a tremendous act for him to accept it.”